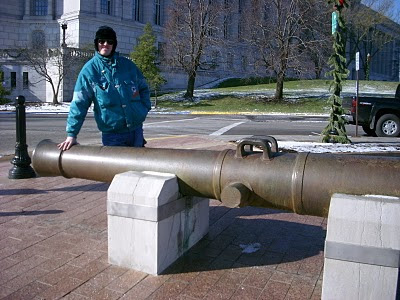 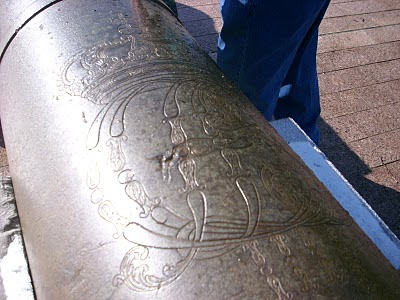 Lettering around the breech, showing place and date of casting 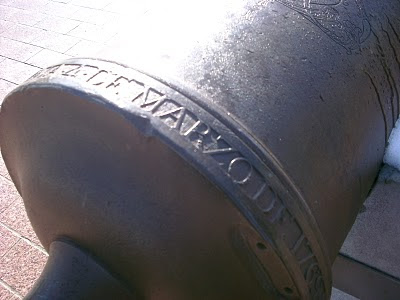 The gun in place 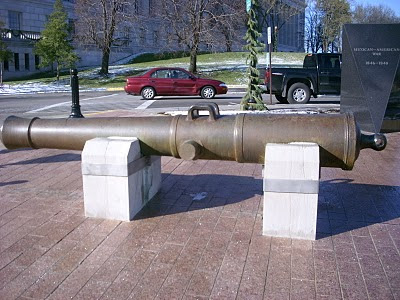 *
On Monday Cindy and I took a trip over to Missouri's state capital of Jefferson City. We had a little time to spare after concluding our business so we took a walk along the Missouri Veterans' memorial on the north side of the Capitol building. Much to my delight we found the cannon shown in the photos above, mounted at the east end of the sidewalk. It's a Spanish gun, cast in Barcelona on 4th March 1769, and captured in the Spanish-American War of 1898. I'm a bit hazy as to its caliber, but suspect it threw a 24 pound ball. Unfortunately I forgot to take a photo of the muzzle, but I can say it had a rather irregular bore. Firing it must have been an adventure every time!
Posted by A J at 09:59 2 comments: 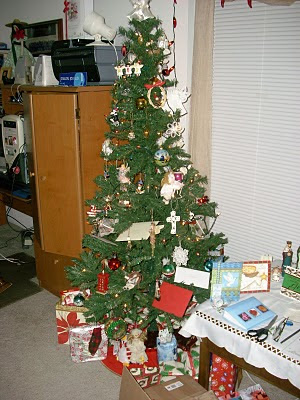 *
It has been a really good day, with my new wife and I spending our first Christmas season together as a married couple. To complete the festive mood, for the first time in many years I'm experiencing a white Christmas! We had an excellent dinner in company with my step-daughters, with a nice big turkey cooked to perfection. To add to the occasion, I got to watch A Christmas Story on TV, a seminal American Xmas movie and one my wife has enthused about for ages. Now I know what those references to Ralphie and "You'll shoot your eye out!" mean!

As for presents, well..! Where I was half-expecting a nice parcel of dragoons from Dayton Painting Consortium, I actually got those and an artillery battery, as well as two extra 6-pounder guns. Once the holidays are over, I'll pitch into painting them up. 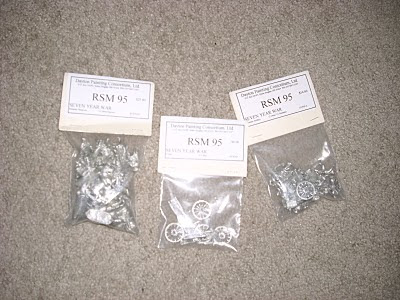 *
Just a reminder, the first volume of The Hetzenberg Chronicles are available in .pdf format. The paperback version will be released in the New Year.

In the meantime, a Merry Christmas and a peaceful and prosperous New Year to you all!

It has been a busy few days here helping my step-daughter come over from Denmark to spend Christmas with us. She got caught in the delays due to the bad weather both sides of the Atlantic and has spent more days in airport terminals than any sane individual would care for. Thankfully she's made it to St. Louis at last and is sleeping-off the jet lag.

I can now turn my thoughts to Hetzenberg matters. A box from those charming chaps at Dayton Painting Consortium arrived on Monday in the middle of the hustle and bustle. On the threat of dire punishment from the Duchess I've had to leave it well alone until Xmas Day, but I suspect it contains the future Rumtopft Dragoons! With a bit of holiday money to hand I can also contemplate buying some DPC Hanoverian infantry and artillery to make up IR 3 Brabenachel and IR 4 Kranke, and a couple of batteries. This will finish off the nucleus of the Hetzenberg army, with two regiments of cavalry, four of line infantry and one of guard, one line and one guard artillery batteries. Even further good news, my family in the UK have discovered a courier company that can ship items overseas for about 1/4 of what others charge, so I may well get the army of Dunkeldorf-Pfühl over here at last!

For those awaiting the release of the Chronicles print version, various Xmas matters have delayed things until just after the holidays, but they will appear! Watch this space...

So here it is, Volume One of the Hetzenberg Chronicles! It contains new material, is professionally copy-edited, and comes in Adobe .pdf format. A print version will appear soon!
*
To order a copy of the .pdf just send payment of $5.95 via PayPal to:-

Please note: This is not an automated system. The copy will be sent to you within 24 hours.

Watch this space or www.smilingassassin.com for further details of releases!
Posted by A J at 06:46 6 comments:

On sale from tomorrow! 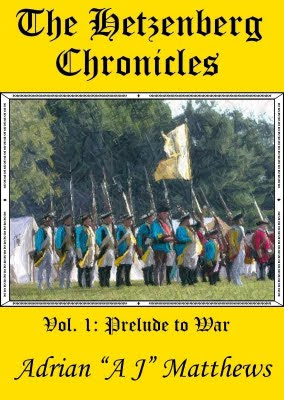 In the space between European empires two small nations hover on the brink of war. As great men on both sides ponder the future, a secret agent and two unconventional women are about to make their mark.

The Convent of St. Ungulant is home to Sister Mary Amadeus, a nun with a passion for blowing things up, and her best friend Ursula Reitzell, a bold and beautiful novice. Little does Mary A suspect her friend is a spy in the employ of Hetzenberg secret agent Konrad Beckenbaur. Little does Konrad suspect Ursula hides a secret that will light the fuse for war.

When fate calls the three are swept up in events that lead them through moments of high terror and drama, comedy and pathos. Will their combined talents for explosives and mayhem see them through?

With great pleasure I announce the .pdf version of The Hetzenberg Chronicles will go on sale tomorrow, priced at $5.95! Orders will be taken from 9am central time onward, and a zip file of the Chronicles sent by return email. Watch this space for further ordering details tomorrow! 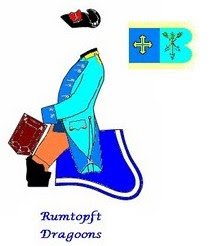 *
Back in summer the Battle of Viehdorf was fought between the armies of Hetzenberg and Dunkeldorf-Pfühl. It was a sanguinary affair that saw much bravery on both sides, not least of which was displayed by the Rumtopft Dragoons in a sterling performance when they stemmed the advance of the Margraf's cavalry.

Will fought the battle by proxy for me as I was in the middle of immigration matters at the time. My thanks again to him. Now Xmas is drawing near, my lady wife has offered to buy me a unit for the Hetzenberg army. I have asked for some dragoon figures from Dayton Painting Consortium's RSM95 range so I can create the bold Rumtopft regiment for myself.

I show their planned uniform above, although I may add a little yellow trim around cuffs and facings. Of course, the battle honor of Viehdorf will be appended to their flag! The colors and heraldic insignia are satisfactory but I'm not sure about the shape. It strikes me as being more of a cavalry design than dragoon. Any thoughts?
*
Work is still underway in completing the Chronicles. We've both been slowed up by post-Thanksgiving bugs these last two weeks but we should get the .pdf version out in time for Xmas - possibly the paperback version too.
*
One of the websites I follow is that of the Edinburgh wargames club. A nice after action report of a SYW game fought by them can be found in their journal.
Posted by A J at 08:00 2 comments:

I hope everyone had a good holiday! It was a busy few days for us, with me and Cindy driving over to Ohio ("round at both ends with a Hi! in the middle") last Wednesday to spend time with her family. It was my first encounter with them and it passed off peacefully, although my poor wife went down with some kind of bug on Sunday and it's still bothering her today. I don't think we ate too much, and it was interesting to drive around Cindy's peaceful little hometown of Findlay. On Monday I took and passed my driving test here in Missouri. It was nowhere near as comprehensive as the UK version - which explains a lot about the way some folks drive here in St. Louis...
*
The copy-editing of the Hetzenberg Chronicles is now complete! All that remains is to format it to the publishing template. The .pdf version will probably be first to step up to the plate. Watch this space...