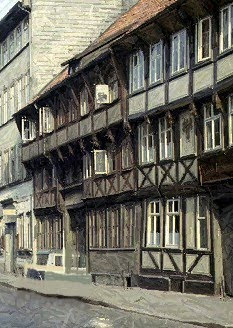 Bartolomeo Gundaker threaded his way through the crowds packing the market square. Although a war raged it occurred many miles away and the battle lines were currently stable. The good folk of Seinfeld went about their everyday business in the bright sunshine with little apparent concern for powers and politics. Nor should they, Gundaker thought. What concern is it of theirs what their betters do? Smells, of goods and humanity in their wide variety assaulted his nose and he tried not to show his distaste as he walked. He passed from the square into a narrow side road, feeling relief at escaping the press even though he regretted having to leave the sunlight. This damn country is never warm enough!

A hundred yards along the narrow way divided, the V shaped peninsula formed by the two lanes occupied by a tall half-timbered building in the local style. Bartolomeo used his field craft to ensure he’d not been followed then ducked into the doorway and pulled the bell handle. Almost instantly his ring was answered by a servant, who showed him up a set of wooden stairs to a small chamber overlooking the lane down which he’d come.

A handsome woman of middling years and plain but finely-wrought clothing sat there by the window, peacefully engaged in embroidery. Two large mastiffs lay on the plain floorboards, their black eyes fixed firmly on him. Their noses twitched as they took in his scent. The musty scent of the dogs made Bartolomeo’s nose also twitch in irritation but he had no recourse but to endure the reek. He knew better than to annoy the woman who awaited him. She didn’t speak as he entered, merely raising her head from her sewing to look Bartolomeo in the eye. Her eyebrow rose in interrogation.

“The Professore is dead,” Bartolomeo began without preamble. “I had the opportunity to substitute a forged letter for one written by him in reply to an inquiry by the Grafin Ursula. She sought to discover the validity of any marriage prospects between her friend and the heir to the Hetzenberg throne. It appeared a good means to sow discord in your enemy’s hierarchy. I forged the reply to the negative before killing the professore by cunning poison.”

The woman studied her embroidery. From where he stood by the door it appeared to Bartolomeo to be some kind of sampler. After a moment she nodded, and a fine hand gestured for him to continue. “From all I have learned the Graf Phillip is quite devoted to Fraulein Mary Amadeus. I intend to enter the Hetzenberg siege lines disguised as a visiting military observer and gain the confidence of the Graf. When opportunity presents itself I shall place forged correspondence of a most intimate nature in the quarters of both the Graf and Fraulein Amadeus. An anonymous tip-off to the Grand Duke will uncover this reprehensible communication, resulting in a crisis between father and son.”

The woman laid her embroidery in her lap and gazed out the window for several minutes. Bartolomeo waited in silence, very much aware the huge dogs’ eyes had not left him for an instant.

“It is a good plan, Herr Gundaker,” the woman said eventually. For the first time she met his eyes and he fought the impulse to step back, so cold and calculating were they. She gestured to a satchel which lay upon a stool a few feet to his right. “Your payment is in there. The rest you shall receive one discord has been sown in the enemy’s command. That is all.”

Bartolomeo bowed, and sidestepped to pick up the satchel. The dogs followed his movements. One growled; the sound seemed to rise from the basement. Bartolomeo swallowed and carefully stepped back to the doorway, the satchel making a nice heavy weight in his hand. “Farewell, lady. Until next time.”
The woman nodded, her attention focusing on the embroidery once more. Bartolomeo backed out of the room and found the servant waiting silently to escort him from the premises. He exited by the same door he’d come in by, and walked back to the market place.
*
The Dowager Margrafin watched him go from her window. Her servant entered the room. “Prepare for my departure to Schwebende Mühe, Walter,” she said. “We shall be leaving within the hour.”
Posted by A J at 19:38 2 comments:

Happy New Year! The last day of the old year closed with a whoosh. A tornado touched down about a mile west of us a little after noon and tore up a city block's worth of damage. No-one was killed, thankfully; some minor injuries is all, but a number of houses were destroyed and a church roof torn off. We were lucky and had nothing more than a strong wind and heavy rain for a spell. Let's spare a moment of sympathy for those who suffered and had their celebrations spoiled, and hope the New Year is less dramatic!

On a more pleasant note, the manuscript of my novel Rebel Hearts has just been accepted by eXstasy Books! Updates as they happen can be found over at my website.
*
So, the New Year is less than a day old here in the United States. What of the future, gaming-wise?

I hope to complete the army of the Margraf of Dunkeldorf-Pfühl, which lacks two cavalry regiments and its artillery. I do have a couple of guns and crew, which I'll paint when I find time. The main problem is most of my collection is still in the UK, and it costs a wheelbarrow full of cash to mail anything of any weight across the Pond. Add to that the fact that no less than three parcels mailed to me from the UK failed to arrive in the last year, and you can see my concern. Hopefully I'll find some way around the problem.
My Africa Station project is advancing slowly. I have found inspiration for a couple of useful buildings, which I'll make one of these days. Writing-wise, I aim to have the next volume of the Chronicles out within a couple months, plus some new adventures of Mary Amadeus, et al. Watch this space...
Posted by A J at 10:01 1 comment: