The Raid on Lehmangraz - part four

The fighting along the waterfront engulfed the Cocytus. Her crew had boarded her but moments before. Now they fought for their lives against a determined surge of jagers. Lieutenant Weissmuller urged his men on, the time to accomplish the mission and get away before the jager were cut off receding by the second. “One more charge, boys!” he shouted over the crack of muskets and the screams of desperate men. “Just one and she’s ours!”

His men responded with a will, pressing up to the gunboat and onto her deck, her crew falling back or down as bayonets probed and muzzle flashes split the murky smoke. Weissmuller followed, waving his sword clumsily as his shoes slipped on spilled blood. He stood poised to board, but took time for a swift glance around. His men closed up, running out of the smoke from the blazing vessel close by. He nodded, turned, saw the dark shape of a vessel close by on the river… 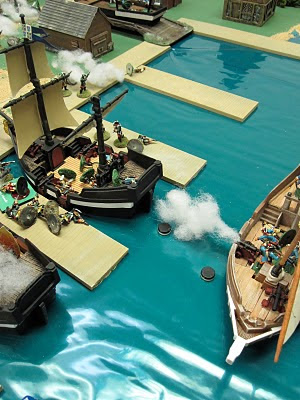 Horatio peered along the stubby barrel of the six-pounder, nodded as it came to bear upon the figures clustering on the dock then stepped back. He raised his sword. “Fire!”

The gun captain brought the linstock down on the touchhole and the gun barked, jerking back on its breechings until they snapped twanging-taut. Horatio leapt into the shrouds to look beyond the muzzle smoke. Figures danced and fell on the dock but the enemy came on again. Two stooped to drag a fallen man aboard Cocytus. Horatio gritted his teeth; her crewmen were dead, surrendering or fleeing. The enemy would take her!

Acheron rocked a trifle and Horatio glanced down at the water to see a current had taken her and was pushing them downstream. When he looked up a jager knelt on Cocytus’ small quarterdeck, his firelock leveled directly at him. Horatio had time to gulp before the man fired. Something plucked at his right sleeve and a white-hot pain shot through his arm. Horatio swayed but remained on his feet, glaring across the increasing gap between the gunboats. An enemy officer appeared, staring back at Horatio, sword dangling in his grasp, a livid splash of red covering his brow. Horatio narrowed his eyes and ignored the pain in his arm. “Reload!” he snapped. 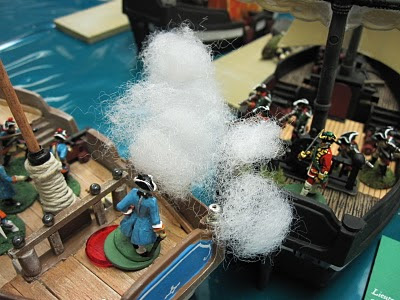 Weissmuller wiped blood from his eyes and glanced around the deck at his surviving jager. How few they are! He thought. The enemy gunboat crew had fled or was prisoner. The blaze aboard the vessel in the neighboring berth threatened to spread to the captured prize. Time we weren’t here! Weissmuller thought through the pain in his head. “Get this thing out onto the river!” he shouted, pointing to the long oars stacked in rails along the middle of the deck. “Use those!”

His men sprang into action, removing the oars and passing them out the sides of the boat. Weissmuller grasped a halyard and fought a wave of dizziness. It won’t do to pass out now. He gritted his teeth and gestured to the six-pounder cannon. “Sergeant, get that cannon loaded and pointed at the enemy vessel!”

The strength of desperate men sufficed to push the gunboat away from the dock and the threat of burning. Clear water began to appear between shore and hull as the sergeant and his chosen men worked feverishly on the unfamiliar gun. Finally, as the gunboat slid clear of her berth, the NCO stood away from the gun and looked to Weissmuller. He glanced in the direction of the enemy vessel out there on the river. The gun looked to be pointing true. Weissmuller nodded and the sergeant dashed the linstock down on the touchhole.

Horatio grimaced as Cocytus’ six-pounder roared. A piece of blazing wad flew past his head with the stench of burning hemp, but he grinned with deep satisfaction as the roundshot missed by a country mile. The range had opened but was not great by any means. Alongside him Acheron’s chief gunner shook his head at the poor gunnery, a derisive expression on his weather-beaten face. “All ready, sir,” the man said calmly. 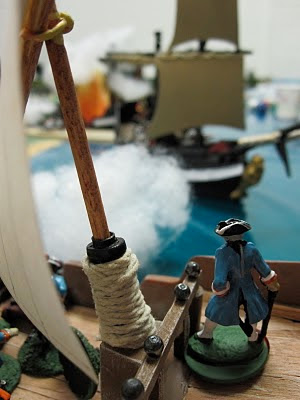 The six-pounder fired. This time the grape spread wide and to immediate effect. Horatio saw men fall over on Cocytus’ deck and hoped to God none of his men were among them.

Midshipman Steiner appeared on deck, a bloodied bandage around his thigh, and limped up to Horatio. “Reporting for duty sir!” the youth said, touching the brim of his hat.

“Not enough to matter,” Horatio said dismissively. The wound felt hot and aching but he could ignore it; too much else remained to do. “Here’s the situation.” He pointed at the Cocytus, and Steiner, veteran that he was, nodded as he took in the scene.

In spite of casualties and for all their obvious lack of ability, the enemy soldiers had succeeded in winning clear of the berth. Someone gained enough control over Cocytus’s tiller to point her downstream. A few men had managed to spread some canvas abroad to capture the morning breeze. Horatio sucked his teeth thoughtfully, acknowledging in his mind the enemy’s bravery and daring. But this will not do. “As I suspected, gentlemen,” Horatio said, addressing his crew in a loud voice. “The enemy wishes to steal one of our boats. Are we to allow this?” A resounding roar of “NO!” sprang from the lips of every man aboard. “Very well!”

Horatio glanced upward at Acheron’s masts. “Steiner, spread enough canvas to enable us to heave-to. Helm, hard to starboard until she bears, then hold her!” Horatio snapped.

Horatio strode forward until he stood by the main gun, and reached out to pat the breech. “Let’s give Old Gertie her chance to speak!”

The crew grinned, expressions fierce. Horatio felt his heart lift as Acheron’s bows swung to point at the unfortunate Cocytus. Through all the alarums and excursions of the morning, from the moment the alarm was raised to the instant he realized he’d survived being shot at, he’d not had a chance to think clearly. Everything he’d done to this instant had been in reaction to the enemy’s movements. Now they will dance to our tune! 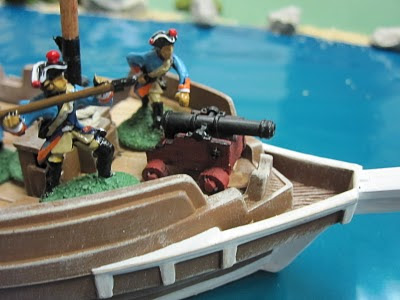 Acheron’s bows swung and steadied on a direct line of bearing to the oncoming Cocytus. Horatio squinted along Old Gertie’s length then stepped back. “Fire!”

The massive cannon roared and flung herself against the restraint of her breechings, impelled by a triple charge of grapeshot. As the dun colored cloud drifted away Horatio sprang into the shrouds and peered ahead. 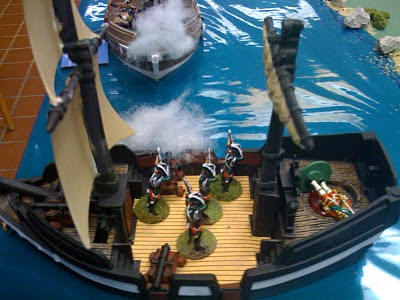 Cocytus looked in a dreadful way. Her shrouds and furled canvas hung in tatters, her bulwarks and scantlings showed great patches of white wood where the heavy lead shot had torn at them. Most of the enemy soldiers lay scattered upon her decks, clearly out of the fight.

“Reload, sir?” asked the gun captain. Horatio opened his mouth to reply then paused as a man staggered to his feet aboard Cocytus, a piece of torn sailcloth in his hand. The man lurched to Cocytus’ larboard bow and waved his scrap frantically. “We yield! In the name of God, don’t shoot! We yield!”

“No, thank you, Master Gunner,” Horatio said crisply as his crew began to cheer. “Secure the guns and stand down.” He stared across at Cocytus. “Helmsman, lay us alongside!” 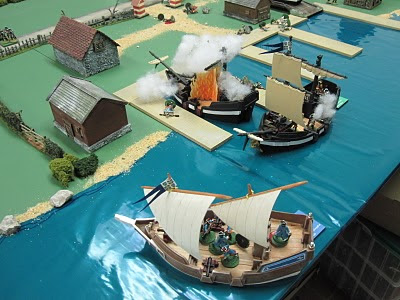 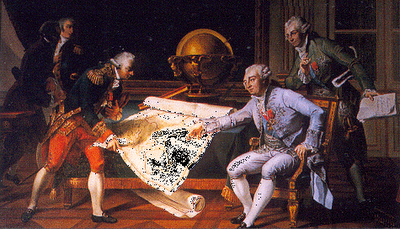 As Grand Duke Karl of Hetzenberg contemplates the world of 1756, may I wish all of you a happy holiday season.
The Chronicles will resume before too long!
Posted by A J at 12:45 3 comments:

The Raid on Lehmangraz - part three

Up on the high road from the village the Marines suffered hideous torment under the guns of the Sobelsburg jager. Lieutenant Horst fell badly wounded with three bullets through his coat before he was quite aware what happened. Around him his NCOs and junior officers strived to restore order but it proved useless. With their leader fallen, the Marines turned tail and fled back whence they came.

Captain Schnoedt watched events unfold and sucked his teeth as the supposedly superior troops ran toward him. He cleared his throat and glanced around at his men, seeing their wide eyes and sensing their unease. “Steady, my lads. It seems we shall have to do the work instead.” He pointed to the distant dockyard. “Our friends and kin are in peril. We needs beat this ambush to reach them.” Without giving the militia pause to think, Schnoedt drew his sword and waved it over his head. “Onward, in the Grand Duke’s name!” 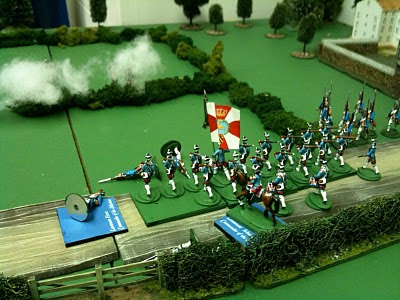 His men followed, as Schnoedt felt his heart begin to hammer in his chest. The last of the Marines streamed past; the braver ones – or those more ashamed – took up the rear to help wounded comrades.

Enemy bullets began to sing overhead. Schnoedt peered at the cloud of smoke lining a hedgerow behind which the ambushers lurked. Step by step the militia advanced, and the enemy fire began to find marks in his ranks, but still they stepped out with grim expressions. “Good lads, good lads,” Schoedt called as he directed them into line. A bullet plucked his hat and he reached up to straighten it. Casting an eye along the line he nodded. “Now, let's give those bastards a volley!” 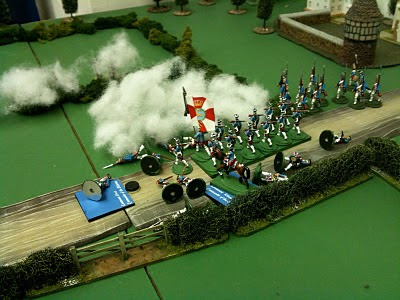 The NCOs translated his orders. Muskets came up to the present, leveled on the hedgerow – and at Schnoedt’s shout of “Fire!” spurted mustard colored smoke shot through with flame.

Almost immediately the enemy fire slackened. Schoedt nodded with satisfaction as his men reloaded. There can’t be that many of them behind that hedge, he thought. He glanced at the dockyard, where the fighting still seemed intense. Smoke rose above it now, thickening even as he watched. There’s the real fight. We’ll see these bastards off the premises soon, I feel. 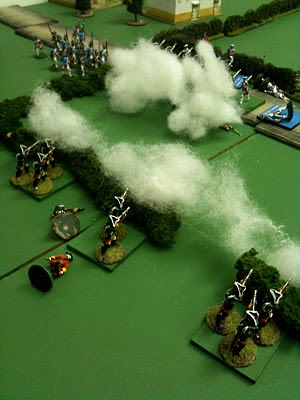 His men presented arms again and again a volley crashed out. The enemy’s return fire slackened then dropped to an occasional pop and bang. Figures moved beyond the hedge, and Schoedt realized the ambushers were retreating. His blood was up, and for an instant he felt tempted to order a charge; but cooler intellect prevailed. They had to reach the dockyard.
Posted by A J at 10:55 2 comments: