The poll for the published form of the Chronicles is now closed. You the people have spoken and we have listened! ;)

There's a decisive result for paperback and pdf versions, so we're going to publish both forms. They'll be published under the Smiling Assassin Publications umbrella. This is a new creative endeavor intended to produce quality materials for wargamers and like-minded individuals. First out of the gate will be the Hetzenberg Chronicles in three volumes, featuring the life and times of two imaginary nations somewhere in 18th century Europe. Upcoming projects include a set of naval wargames rules for World War Two.

Meantime, here's a brief excerpt from Chapter One of Volume One, the Hetzenberg Chronicles...
* * *

Ursula stumbled to a halt in the lane and stared aghast as the old barn at the edge of the field flew apart like a bursting bubble. A white mushroom cloud speckled with debris lofted high into the frigid air and blotted out the early morning sun that hung low over the mountain.

“Oh! Mary A!” she yelled. A wave of hot air washed over her, plucking at her habit and wimple and filling her eyes with dust. Ursula flung up her arms to protect her face as something large and black hurtled close overhead. She dropped flat on the frosty ground. Whatever it was plunged into the flooded ditch alongside the lane and showered her with icy water. Ursula cringed from the drenching cold and flinched as more debris rained down. The ground shuddered under some close impacts. By a miracle she was untouched. Finally the rain of debris ceased. Ursula rolled over and stared at the plump legs sticking out of the water. They moved feebly, showing glimpses of thick winter-weight stockings and a flash of sky-blue habit. A sensible black shoe dangled from one foot then dropped onto the broken ice and sank slowly out of sight.

Ursula scrambled to the edge of the ditch and slithered down the bank to the water. Dimly aware of other nuns approaching at a run, her priority was to rescue her friend. She reached out and seized Mary A’s legs and tugged with all her strength until her head emerged from the water.

“What happened?” an educated voice called anxiously from above. “Who’s in there?”

Ursula recognized the voice and looked up to see Abbess Hilda, the Mother Superior of the House standing on the edge of the ditch. “It’s Sister Mary Amadeus, Reverend Mother!” 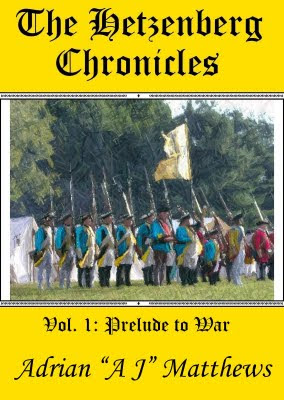 Cover art © 2009 Cindy & A J Matthews.
*
The year is Seventeen-hundred and frozen-stiff. In the space between European empires two small nations hover on the brink of war. As great men on both sides ponder the future, a secret agent and two unconventional women are about to make their mark...

The Convent of St. Ungulant is home to Sister Mary Amadeus (a nun with a passion for blowing things up), and her best friend Ursula Reitzell (a bold and beautiful novice). Little does Mary suspect her friend is a spy in the employ of Hetzenberg secret agent Konrad Beckenbaur. Little does Konrad suspect Ursula also hides a secret that will light the fuze for war!

When fate calls at the convent the three are swept up in events that will lead them through moments of high terror and drama, comedy and pathos. Will their combined talents for explosives and mayhem see them through? All will be revealed in -

The Hetzenberg Chronicles -
Volume 1: Prelude to War.
* * *
Final preparations to publish the Chronicles are in hand. Such is the flexibility of modern publishing I can now ask for the format readers would like to see. Check out the poll on the left. Feel free to leave me comments on the price you'd be willing to pay, and any other ideas or suggestions you may have. Any short reviews or blurbs you'd like to give on the Chronicles as they were published here are welcome.

BREAKING NEWS... Some of the pioneering names of our hobby have joined forces to create a blogspot of their own. Entitled The Blasthof Blog it is dedicated to the classic Charge! rules by Brigadier Peter Young.
*
Featuring such luminaries as Stuart Asquith, Steve Gill, Phil Olley and John Preece, the aim is to explore the book, depict units in the old school style and play out the occasional game. Please join with me in wishing them well! 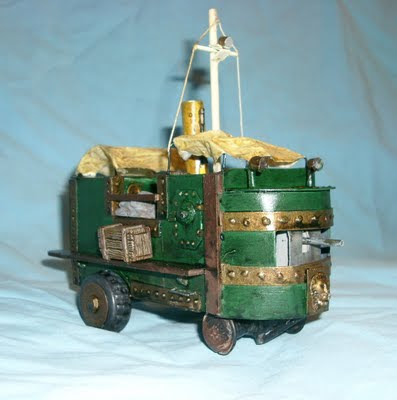