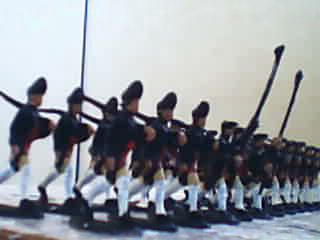 I've begun painting the first regiment of the Margrave's army. This is composed of Spencer Smith 30mm figures in the fine old-school tradition. To begin with I had to feel my way through the painting process with these, as the (deliberate) lack of clear definition (and my aging eyes) makes it hard to place paint in the proper locations. Even so, once I got into the swing of things I found they are nice and easy to paint, and I hope to finish them by this weekend.
Posted by A J at 06:34 3 comments: 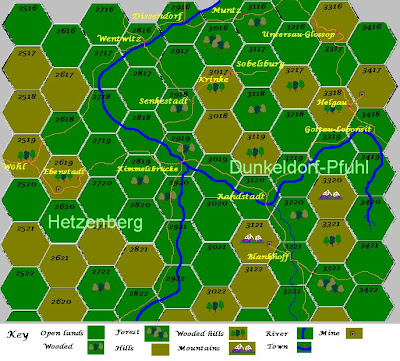 Here's a small part of the campaign map for the wars between the Grand Duchy of Hetzenberg and the Margravate of Dunkeldorf-Pfühl. The major (as yet unnamed) river forms the main border between the two, and flows south-to-north. The extract shows "the Cockpit," a broad valley centered around the town of Kimmelsbrücke which has an important fortified bridge. The uplands to the west of the town are rich in mineral resources, and a silver mine is shown near the town of Ebenstadt.
*
To the east lie the Margravate lands with the Vauban-fortified town of Randstadt. The town guards the choke-point formed by the confluence of two river valleys which lead in turn to fertile plains country further to the east (off the map). On the hills above these valleys lie the towns of Blankhoff with its iron mine, and Helgau with a coal mine.

Coal, iron and silver - three minerals which have plenty of applications for warfare - and a broad valley just right for military maneuvers. With tensions rising between the two nations, the valley of the Cockpit may soon be living up to its name...

I've not made much progress on anything these last few days due to jury service taking up my time. I have managed to complete the main geographical features of the Margravate, and position a few towns, all purely by dice rolling. It's interesting to look at the map and already see potential areas of conflict emerging.
*
There's one wide area in almost the center of the map where the valleys of a number of hill and mountain ranges converge to form a natural choke-point. It's just begging for a fortress to be sited there to guard the passes and the fertile lands at their heads against Hetzenberg aggression. Equally, across the central river that divides the two nations is a range of hills with a mine and untapped mineral deposits - tempting targets for the Margrave to launch cross-border raids and maybe initiate wider-scale conflict to control them for good. It's all beginning to take shape...
Posted by A J at 12:27 3 comments:

The 24 Spencer Smith miniatures that are to make up the first regiment of the Margrave's army have been de-flashed and undercoated using a matt black spray undercoat for the purpose. While these dry overnight I turned my attention to the master campaign map.
*
I've finally decided upon a hex scale of 1 = 5 miles. This is a nice, unfussy method of measuring distances and also functions as a means of gauging the resources of an area. So far both the Grand Duchy of Hetzenberg and the Margravate of Dunkeldorf-Pfühl measure roughly 150 x 150 miles each. I'm using an A1 sized hexagon paper bought many years ago, and the scale permits plenty of room for minor states around the peripheries of the main combatants. Hetzenberg is now mapped out in rough; the Margrave's domains will be next.
Posted by A J at 12:57 6 comments:

Now the first units of the Hetzenberg army are complete, I'll turn my attention to their deadly rivals, the army of the Margrave of Dunkeldorf-Pfühl. One regiment of Spencer Smith miniatures is in my box awaiting de-flashing and the detergent wash. I hope to get busy with them this weekend. Because the models are so different from most others on the market, they'll require a slightly different approach to painting - perhaps even somewhat toy-like. I'll see how they develop.
Posted by A J at 11:29 3 comments: 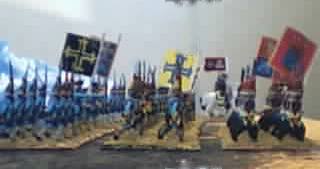 Infantry Regiments #1 Sleibnitz and #2 von Wöhl, led by the Leibgarde Grenadiers, on their first maneuvers of the New Year, with the Blaueberge in the background. 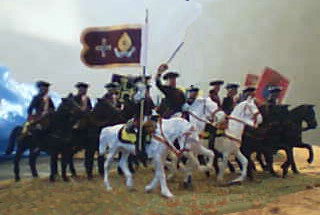 The Bishop of Guggenheim's Regiment of Horse on maneuvers.
Here are a couple of pictures of the growing might of the Grand Duchy of Hetzenberg. Half of the First Infantry Brigade is now complete, along with half of the Guard Cavalry Brigade in the shape of the Bishop's Horse. The Leibgarde Brigade is represented by the Grenadier regiment.
*
The Guard Infantry Brigade will be completed with the addition of the two Leib Fusilier regiments, a jäger battalion and an artillery battery.
*
The First Brigade will be completed by Infantry regiments #3 Bräbenachel and #4 von Kranke, a jäger battalion and an artillery battery.
*
Sharp-eyed observers will notice the guidon of the Bishop's Horse is larger than would normally be carried by cavalry, but I prefer the larger design as it's more visible.
Posted by A J at 05:57 9 comments:

I've placed an order for three of the Gothic range of molds from this company, as I think they'll suit scenery-building for 18th Century wargames very well. I'm impressed by the thought and skill which has gone into them and I'm looking forward to using them. Looking at the dungeon designs, I wish I'd been able to obtain them back in my D&D playing days.
Posted by A J at 13:50 4 comments:

The Bishop of Guggenheim's Regiment of Horse - 3

This fine regiment is painted and based, and merely awaits the final layer of gunk (technical term) and flocking. Once it's done I'll take photos of their parade. I've also made the road surface for the tower base. Pictures at eleven...
Posted by A J at 10:57 4 comments: 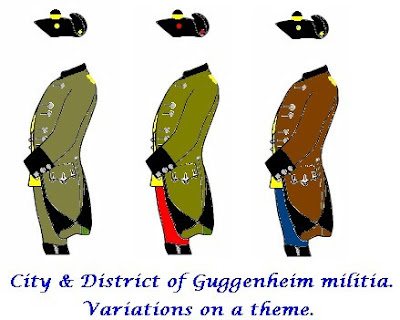 Many thanks to those who took time and trouble to respond to my previous posting. My sense of Hetzenberg is that it's an area which has seen a moderate degree of strife through invasion and minor border violations, and so would have a formal militia to respond to these. Those units raised in the frontier regions would possess at least some competence, perhaps even to the extent of fielding specialist skirmishers, but this competence would diminish the further one travels into the safe interior of the country.
*
The militia is composed of those normally exempt from regular military service and those too old/too young to serve with the colors. It meets for drill and maneuvers two or three times a year, and the general pattern of a green uniform to the Saxon design is set by the Grossartiger Armeerat - but there are many variations within the pattern to be found in the various militia units. The inspiration (and historical precedence) for this lies in the French Garde Nationale during the Franco-Prussian War of 1870-71. Although the Garde's approved uniform design followed that of the regular army, all kinds of exotic and wonderful creations appeared.

The uniform shown above is for the City & District of Guggenheim, a prosperous community well able to provide its militia with uniforms. Parochial and guild pride has led to liberties being taken with the uniform colors though, with different parishes and guilds fielding companies in distinct variations. In the case of the company on the right, some enterprising fellow has even contrived to obtain breeches in the Prussian blue favored by IR 1 Sleibnitz of the regular army. The common theme to them all is the weskit, cuffs, turnbacks and cockade in the Guggenheim colors.

There is no set pattern for militia standards, although the Hetzenberg Cross of St. Ungulant always appears somewhere in the design. Much as in the American Civil War days, such standards are created and presented at special parades by various groups of patriotic citizens to their local militia company.

I've been thinking ahead to the time when my campaign gets under way. Militia will feature in the natural order of things when countries invade or are invaded. In some of the minor neutral states and cities they may be all the armed force available. In any case the militia of the militant nations will form garrisons, or local area defense. So, how do other gamers treat ImagiNation militia? Do they feature in physical form on your table, and if so, how do you deploy them? Are they skirmishers, using local knowledge to harass the emeny invaders, or do they form up in ranks? Do you favor some kind of uniformity, or is a battlefield a "come as you are" affair for them? Enquiring minds would like to know!
Posted by A J at 13:03 7 comments:

Nothing much happening today, although I plan to work some more on the Bishop's Horse command element sometime. The troopers are mounted on chestnuts but the commander, guidon and trumpeter will be riding grays. I began with a black undercoat, then a good coat of white, followed by a white wash. Grays have markings on their hind quarters that I replicate using a fine-pointed hard pencil. Just draw the markings on (they resemble small circles in 28mm scale) and put a thin wash of white then a thin wash of light gray over all.
*
It's with some surprise and a lot of pleasure that I see this blog has passed through the 1,500 visitors mark since it opened on 15th September, 2007! Many thanks to my visitors - and here's to a happy year for us all!
Posted by A J at 07:58 2 comments: 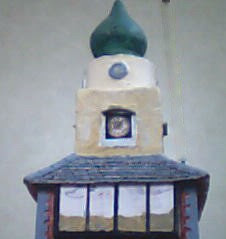 The side of the tower. 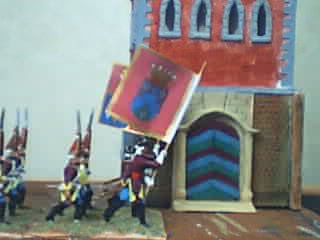 The Leibgarde Grenadiers march past.

*
Here's the tower with the first major areas of color blocked-in. Wisdom has it that all model buildings should begin with darker colors near the base, working upwards and lightening each shade along the way. I've done the same here. All pigments used are acrylics; some areas are made of card (such as the doorway and portico) and these were treated to paint with a little PVA mixed in. The door is painted in the Hetzenberg national colors in the chevron style favored in some German countries. Two brass door rings will be added when it comes time to paint finer details.
*
The dome was probably the hardest area to get right in terms of shade. I don't know about anyone else but I find verdigris a very hard color to replicate. In this instance I began with an undercoat using Vallejo light gray (70990) over the whole dome and the area atop the cupola. Over this went a coat of grass green (Miniature Paints 15), then a coat of Humbrol green (5037) with a little of the light gray mixed in. While this was still wet I dabbed on more gray using a piece of foam, and once this was dry I finished with a wash of black, dabbing off some of the wash to leave lighter areas to reflect the variable effects of weathering. It's not a bad attempt I don't think?
*
So, this project is essentially finished. All that needs to be done is for the windows to be added to the gallery and the cupola, some minor relief in light shades here and there and a black wash over the tiles.
Posted by A J at 03:16 5 comments: