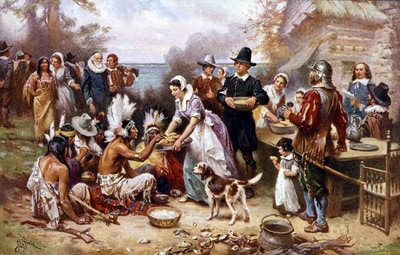 A very Happy and Peaceful Thanksgiving
to
my fellow gamers in the United States.
Posted by A J at 03:21 No comments:

On the practical side. 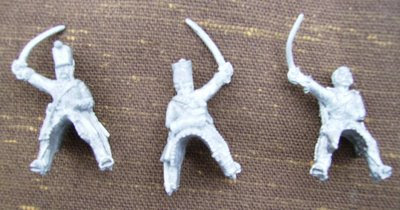 Some time ago I discovered these figures in amongst a job-lot of Napoleonic/ Revolutionary French I acquired. I've identified them as Front Rank Miniatures post-1812 Hussars, but may be wrong. In any event I had intended to convert them to SYW-era hussars and they would then serve in the Markgraaf's army.
*
For some reason the guy I got them off never bothered to order horses for any of the cavalry in the collection! That being so, I checked out the prices for mounting the regiment and getting suitable command element figures, and found it uneconomical when compared to, say, buying an entire mounted regiment from Dayton Painting Consortium. It would be a shame not to use these figures in some way as I like the process of conversion, but for now, this project has been put on the back burner.
Posted by A J at 00:23 4 comments: 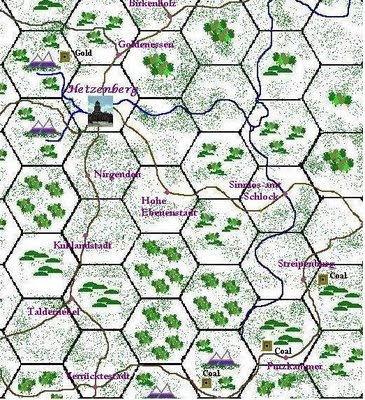 *
The Heart of Hetzenberg is a region some sixty miles across, with the Capital in the north west nestling in the lee of the Hetzenberg and Blauerberg mountains. The country is a mixture of mountains, foothills, plains and woods, with rich seams of gold in the Hetzenberg and coal in the southwestern hills.
*
By tradition only the guard regiments are quartered within the Capital. The line cavalry are in barracks at Nirgenden where the ground is open enough for maneuvers and drill; the infantry are stationed in barracks across the country. One of the privileges of the First Line Regiment (in this case IR1 Sleibnitz) is to guard the town of Sinnlos-amt-Schlock with its important Abbey and river crossing.
*
Hetzenberg is a city of culture, with many galleries, theaters and fine parks. In keeping with the general merry nature of the people of Hetzenberg each season is marked by a great festival. Spring is marked by Die Ostern-Parade where folks break out their finest clothes to mark the passing of winter and the coming of new growth to the world. Long tables are set out in the wider streets and in the parks where a great feast is served.
*
Midsummer is marked by Die Blumenfestival as wagons decorated with bright flowers parade through the city to the accompaniment of bands, dancing and much drinking. If the army isn't on campaign it takes part in the parade, with the Grand Ducal Guard at the head in the position of honor, followed by the regiments in order of seniority and the artillery at the rear.
*
Fall has Das Fallen der Blätter, where dancers garbed in bright reds, yellows and oranges parade around the city walls to celebrate the gathered harvest and warn of the coming of winter. This is the time of year when couples wishing to become engaged do Der zukünftige Tanz. Each boy dances around the girl of his choice with his arms open, in a manner similar to a waltz. If she is willing to be his wife she will wait until he has danced around her at least five times before stepping into the circle of his arms and continuing the dance with him. A real tease will wait the maximum of twenty-one times before doing so. The decision is held to be binding and the marriage takes place within a year. As most couples are willing to marry before the dance begins, rejections seldom happen. When they do, it causes something of a scandal.
*
Winter itself has Das Laternefestival, held on Midwinter's Night to celebrate the turning of the year. The townsfolk throng the snowy streets carrying bright colored lanterns to the accompaniment of music and the drinking of traditional mulled wine and ale. Contests are held to find the best snow and ice sculptures. The snowball fights in Der große Park are legendary, with the Grand Duke having the honor of throwing the first. Each year during this festival the Grand Duchess awards a purse of five gold coins to the couple who can prove they have not exchanged a bad word with each other since the last festival. Up to five witnesses can be called to attest to the couple's virtue.
Posted by A J at 02:21 1 comment: 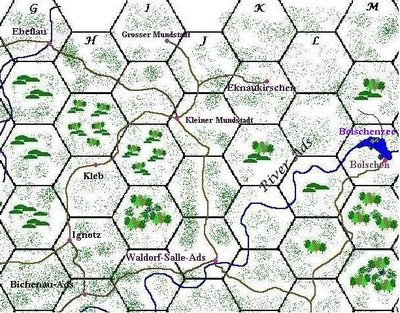 *
Here is the north-central region of the Grand Duchy covering the Grafschaft und Abteilung of Nordseite-Ads. Administered from the cathedral city of Waldorf Salle-Ads, the region is mostly agricultural and noted for its dairy and beef cattle. Timber and charcoal production centers are dotted throughout the forested areas.
*
The River Ads flows south-west to north-east until it meets the Bolschenzee where it turns eastward to meet the Eisenwasser. Thermal springs in the area have made the town of Bolschen itself a popular spa resort, and it has been the winter residence of the Grand Dukes for over forty years. As an adjunct to the income provided by resort visitors, the sulfur produced by the hot springs is mined for various industrial uses. This and the charcoal produced in the forests form a vital war commodity, being components of gunpowder, which is processed in the town of Kleiner Mundstadt before being shipped across the Duchy.
*
The cathedral city of Waldorf-Salle-Ads was the site of the famous Declaration of Saint Ungulant in 1548. Following a serious breakdown of social responsibility and a rampant run on blue cheese futures, Ungulant, then Prior of the Cathedral school marched up to the doors of the cathedral and nailed his "Twelve Recipes for success" to the ancient timbers.
*
The shock of what he wrote resounded throughout the Unangenehm und Nicht Notwendig Reich, and some historians point to that morning as the moment the old Reich began to fall apart. The blue cheese market stabilized when traders realized their cupidity, leading to a general improvement to the economy as a whole. To this day thankful pilgrims roll wheels of blue cheese to the top of the Hetzenberg, often on their hands and knees to give thanks for Ungulant's wisdom and to take in the wonderful views from the top. Ungulant himself went on to appear in several live ecumenical debates which always drew top ratings and wrote his "Thesis for a Better Venison Pie," and "Whereat the Suet Dumplings?" which went on to become best sellers.
*
Ungulant died in 1608 and was interred in the cathedral. Canonised soon after, his work remains controversial up to the present day, when the Ecumenical Convocation of Waldorf-Salle-Ads met to decide how his works should be applied to modern living standards. The Convocation was a lively, often contentious affair which unfortunately divided opinion even further. When Chairman of the Convocation Bishop Wolnutz produced his treatise "Wolnutz on Waldorf-Salle-Ads" summing up his opinion of the debates, it led to a schism between the Traditionalist faction centered in the Markgravate of Dunkeldorf-Pfuhl, and the Progressive faction centered in Hetzenberg. Only the presence of mind displayed by Abbess Hilda of the Oscillating Order of St. Ungulant prevented outright conflict when she produced the pamphlet "Pouring an Olive Oil Garnish on Waldorf-Salle-Ads." Even so, this stayed the trouble for but a brief while. Lines were drawn, and the traditional bad blood between Grand Duchy and Margravate soured further.
*
The Grafschaft of Nordseite-Ads is an ancestral title of the Grand Dukes and is usually conferred on the heir-apparent, in this case Graf Philip von Hetzenberg. Although sixteen years old, he received instruction in his future duties from his early teens thanks to his father's policy of ensuring good government through good education. The Graf does not have full control over the County's affairs, nor will he until he reaches the age of eighteen. At the moment he receives reports from the County Council into matters of economy and military affairs but has little input in anything save matters of culture. As Graf Philip loves fireworks and has a good eye for art and design, the County's celebration displays make full use of the gunpowder produced here and tend to be the best in the Grand Duchy. He has already produced a pamphlet "Dann explodiert sie!" covering his theories, and has announced his intention of promoting an annual award for excellence in firework ordinance design once he reaches his majority.
Posted by A J at 03:52 2 comments: